Get ready for some Wiggly Giggly Fun

Tucked away in the heart of Darlinghurst, the Tap Gallery was buzzing on the opening night of Murder Most Funny and there was not a spare seat in the theatre as the crowd enjoyed an original work that had the audience as engrossed as a group of five year olds at a Wiggle’s concert.

Murder Most Funny follows the story of the ‘Giggles’ who are an all singing, all dancing children’s entertainment group who are taking their final bow after ten years of wowing the nation’s children. But before their final concert the band ends up in a pickle, as something terrible has happened in their bathroom…

This play combines the intrigue of a murder mystery and the fun and corniness of children’s entertainment. The cameras are off and the audience go backstage with one of the world’s most famous bands, the ‘Giggles’. The backstage drama is a funny insight into what might go on in a children’s band and as the investigation takes place, secrets are revealed.

Playwright and director Tony Laumberg greeted the audience as the houselights went down, and shared the inspiration for the play; his own love of the Wiggles, and he set the scene with his own performance of ‘Hot Potato’.

The trio of children’s entertainers Jasmin Certoma, Nick Hunter and Seaton Kay-Smith as Jade, Corey and Kevin had big shoes to fill but did the skivvied man band proud. The trio worked well together, and they managed to maintain their zany energy throughout. Seaton Kay-Smith’s as ‘Kevin’, with his random ‘great nanna stories’ and musical outbursts made him a stand out performer with some hilarious one-liners. Tricia Youlden as Felicity, the ‘Giggle’s’ publicist, also added humour to the situation by adding a cynical media spin to the investigation process.

Murder Most Funny is a fun and entertaining original work by an Australian comedy playwright with an impressive body of work. The play is an interesting take on the Australian icons and what it means to be a children’s entertainer, and if you have ever found yourself singing along to a Wiggle’s song, or engrossed in a murder mystery, then this is a play for you. 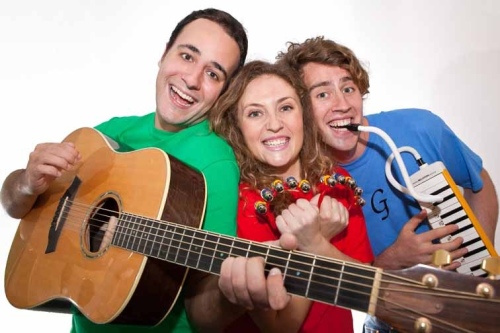 Murder Most Funny is playing at the Tap Gallery in Darlinghurst until 9 September. Click here for booking information.

This entry was posted in Reviews. Bookmark the permalink.