Multiple award winner Tommy Bradson (Sydney Fringe 2011 Award for excellence) is back with a much anticipated one-man show Sweet sixteen – or the birthday party massacre. With show notes indicating “there should be cake. There might be blood. There will be rock’n’roll” it certainly seemed like a sweet sixteen party not to be missed.

Sweet sixteen is captivating from the very first second. As you walk into the Reginald Theatre a talented three-piece band, consisting of Alon Ilsar on drums, Mick Stuart on guitar and Sean Hennessy-Brose on keys, churns out relaxing instrumental music behind a colourful, wonderfully cluttered set. A dining table set for 8, comfy sofa, birthday presents and a blown up pool filled with balloons give the small stage area a festive yet comfortable homey atmosphere that puts the audience at ease straight away.

Bradson makes his first entrance in a purple poncho, introducing himself and belting out a hearty rendition of Let’s have party before gliding off stage. In his absence a classic BBC radio voice can be heard outlining the plot of the coming production, a surprise party for one Lula Whitlam, as the voice fades away Bradson returns as the first of his four main characters, Lula’s mother June. June is determined to have a successful surprise party for her daughter with everything from fairy-bread to cheese cubes, because everyone knows “you can’t have a party without cheese cubes.” Aside from June Bradson also takes on the personas of Lula’s beer guzzling father Gary, also responsible for the pig on the spit, her boyfriend Johnny and finally Lula herself.

Each of the four main characters is given the chance to enhance their narrative by performing songs chosen to showcase their individual plights. From June’s soulful rendition of Dead end street to Gary’s Demon Alcohol, and Johnny’s Be-bop-a-Lula Bradson manages to draw the audience into the characters world and capture the spirit of Australian suburbia in the sixties.

Though I don’t remember any of this era myself the music composition, arranged by acclaimed Melbourne musician John Thorn, really struck a chord with me and again added to the general atmosphere of the performance whilst giving weight to the characters and allowing Bradson to showcase his musical talent.

The intimate scale of the Reginald theatre was perfect for this performance, confining the audience to a manageable area when the inevitable “audience participation” segment of the production commenced.

Although I’m not usually a fan of audience interaction, in fact it makes my heart speed up just thinking about it, I found that in this instance it added an extra dimension to the play and enabled the audience to really connect with the story being told. In fact by the end I was almost wishing I did get pulled on stage…almost.

A couple of minor hiccups with the microphone and placement of props proved the only downsides to the evening. These mishaps could easily have thrown off the performance but instead seemed to lend themselves to the absurd nature of the entire experience. This I believe is a testament to the professionalism of Tommy Bradson and his supporting cast (audience included).

Overall Sweet sixteen – or the birthday party massacre is a show not for the feint-hearted. It is a no holds barred take on Australian suburban life in all its glory, complete with gasp worthy non-PC remarks. My advice – check your judgement at the door and sit back and enjoy the pure frivolity of it all. 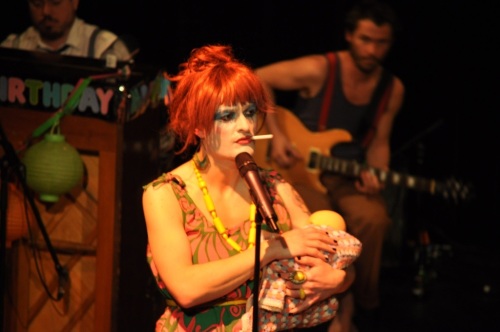